The leading candidates for U.S. Senate from Georgia were born just 115 miles and seven years apart, both the children of poor Black families who had lived in the state for generations.

As Democratic Sen. Raphael Warnock and Republican football star Herschel Walker compete in one of the most closely-watched Senate contests in the country, each carry their own experiences as Black men growing up in south Georgia during the twilight of the civil rights movement. That history has informed both their lives – and their opposing views on race and racism echoing on the campaign trail now and likely, when they face off on the debate stage in Savannah Friday night.

“23andMe has screwed us all up,” Walker said at a recent rally outside Atlanta, referring to the brand of home genetic tests often used to determine a person’s country or region of origin. “It don’t matter about your color. A house divided cannot stand, so I want us to come together.”

Walker has recently come under scrutiny for allegations of domestic abuse and violence as well as reports that he paid for an ex-girlfriend’s abortion even though, as a candidate he supports a total ban on the procedure with no exceptions.

Walker is no stranger to controversy in this election and he has also made headlines for how he talks about race, saying Democrats like his opponent use it to divide.

As a senator, candidate and senior pastor at Dr. Martin Luther King’s Ebenezer Baptist Church in Atlanta, Warnock has spoken often about dismantling systemic racism. During his first floor speech in the Senate, Warnock slammed new restrictive voting laws around the country.

“This is Jim Crow in new clothes,” he said.

Conflicting approaches to grappling with race have come into sharp relief in the first Senate race in Georgia history to nominate two Black men. Walker and Warnock’s worldview began to diverge decades ago – as Walker shined on the field and Warnock rose to the pulpit.

“These are two of the most important institutions for questions of democracy and equality,” explained Leah Wright Rigueur, a political historian at Johns Hopkins University.

“The institution of the church is, for many Black communities, a lifeline. It’s an organizing and mobilizing space. Certainly sports becomes a site of resistance, in terms of African Americans desegregating teams, African Americans using sports to grasp some measure of social mobility.”

When Walker played football and track at Johnson County High School, it had only been integrated a few years.

Republican Senate nominee in Georgia Herschel Walker rose to fame as a high school, college and then professional football player

Republican Senate nominee in Georgia Herschel Walker rose to fame as a high school, college and then professional football player

“I was just coming out to be a great athlete,” he told rapper Killer Mike in an interview on WABE. “And I think my high school was probably 50-50 white-Black.”

In Walker’s memoir, he wrote about being overcome with fear of the Ku Klux Klan. He recalled their members stalking Black kids as they walked home from school, yanking them into the woods for mock lynchings.

“There is a broad misconception about what life is like in the 1980s in the South,” Riguer says. “There still remains a very segregated economically unequal society for African Americans.”

For Warnock, that society was Savannah, Georgia and the public housing complex where he grew up. As a teen, Warnock spent hours at a nearby library listening to archival recordings from the civil rights movement – especially speeches by King.

An undated photo of young Sen. Raphael Warnock (D-Ga.) outside the public housing complex where he grew up

An undated photo of young Sen. Raphael Warnock (D-Ga.) outside the public housing complex where he grew up

“There are men who stand up in the pulpit and preach every Sunday, and yet they can look at racial injustice and never open their mouths against it,” King bellowed in a particularly influential sermon for Warnock – “A Knock at Midnight.”

“He preached a different kind of gospel from what I typically heard in most churches,” Warnock wrote in his memoir. “He used the lens of the scriptures to examine and speak out against racial injustice and oppression.”

Warnock continued to be influenced by King as he selected his university: Morehouse College, the historically Black school in Atlanta attended by King four decades earlier. Warnock signed up to serve as an assistant at the King Memorial Chapel on campus. The dean, Lawrence Carter, became Warnock’s mentor.

“Supremely confident, mature beyond his years,” Carter remembered Warnock in an interview. “He seemed to be in a zone all by himself. He frequently would come into the chapel library, no one else there, and study and write.”

It was at the chapel where Warnock’s ideas about racial justice and faith coalesced.

“When our chapel is packed and our 6,000 pipe organ is sounding in their ears, surrounded by people doing bold things, that pours iron into your spine,” Carter says. “And when you see injustice, you want to do something about it.”

At around the same age, Herschel Walker would soon be called on to raise his own voice in Wrightsville.

Walker had just led Johnson County High School to the 1980 state football championship. It was national news when Walker accepted a full-ride to play for the University of Georgia. Days later, Wrightsville attracted the country’s attention again.

Protests against racial injustice had broken out, directed at the county’s white sheriff. As marchers gathered, they were met with violence. The Klan mobilized and the governor called in state troopers, while schools and factories closed. Local residents and out-of-town civil rights leaders pleaded for Wrightsville’s most famous resident to speak out.

“White people called him the N word and he had Black people calling him Uncle Tom,” Tom Jordan, Walker’s track coach and an early mentor, said in an interview. “And he was just searching for his spot.”

Walker faced pressure as he weighed his own decision about whether to do something about racial injustices in Wrightsville.

“I called a team meeting,” remembered track coach Tom Jordan. “I said, ‘Look, guys, you can’t get in shape for a track meet marching. You’ve got to run. Practice is at three and you know I don’t tolerate missing.”

More than a dozen of Walker’s teammates quit the track team. Walker did not.

“My parents taught me to do what’s right,” Walker said later. “There’s no color in right and wrong.”

He did not say anything publicly about the protests.

“What would have happened if I had went the other way?” Walker told Killer Mike. “Where would I be today? Because now I have an opportunity, where I can get a seat at the table.”

That seat at the table may be in the U.S. Senate.

“His political viewpoints and rejection of race as a consideration does not represent African American audiences,” explained historian Leah Wright Rigeuer. “It is, however, the perspective of the majority of working class white voters in the state of Georgia.”

Rigueur, who wrote a book titled The Loneliness of the Black Republican, says these views are not an anomaly – citing for example, Georgia-born Supreme Court justice Clarence Thomas, one of the most conservative members on the bench. Rigueur says these perspectives should not be ignored or treated as a fringe viewpoint, particularly when coming from people with immense influence to shape American life.

“We should want to understand that because of what it tells us about the very nature of Black politics, but also questions of American democracy,” Rigueur says.

During this campaign the two men have laid out conflicting descriptions of the country’s current divisions, as they compete in an election most polls show is a tossup and could determine which party controls the U.S. Senate.

“We’re not a racist country,” Walker said at a recent rally. “The United States is the greatest country in the world today and it’s time we get leaders that know that.”

“Within 24 hours, we elected Georgia’s first African American and Jewish senators,” Warnock said last year on the Senate floor. “Hours later, the Capitol was assaulted. We see in just a few precious hours the tension very much alive in the soul of America. And the question before all of us at every moment is what will we do to push us in the right direction?”

Warnock and Walker’s lives took them in two different directions, and Georgia voters will choose which candidate they want to follow. 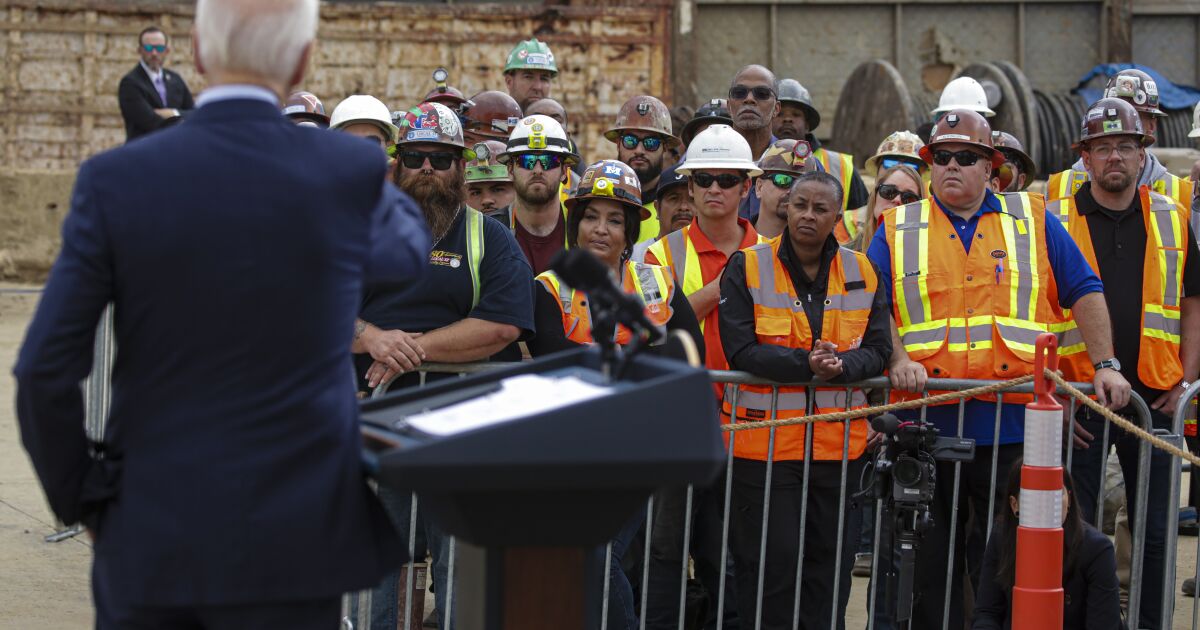 Next Article Photos: Biden in town to tout infrastructure, makes stop at Tacos 1986

Democrats’ ability to hold their Senate majority this midterm defied both historic precedent and widely held expectations. They did so despite President Joe Biden remaining […]

Florida’s governor expands a state of emergency to addtional counties as Nicole whips across the state. (Nov. 10)

Simone Biles has a message of caution for anyone thinking about dressing up as serial killer Jeffrey Dahmer for Halloween. Following the release of Netflix’s […]

Yankees’ haymakers not enough vs. the Guardians’ jab-jab style

CLEVELAND — The Yankees lost when Aaron Judge homered. They lost when a Judge homer had seemingly eased the whole team’s mounting tension and defibrillated […]