What happened to the goose that stole all the attention at Dodgers playoff game?


Roughly 47,000 fans at Dodger Stadium hardly noticed at first when a goose made a rough landing in shallow right field during the eighth inning of Wednesday’s NL Division Series game between the Dodgers and Padres.

But then the stadium’s camera operators spotted the bird and blasted its image onto the stadium’s jumbotron screen, drawing hoots, laughter and cheers from the crowd.

Fox Sports TV broadcasts zoomed in on the disoriented goose, its head swiveling side-to-side as it sat in the outfield, as one play-by-play announcer commented, “Ducks are very aggressive. I don’t know if you know that. They’re very aggressive.”

Another commentator asked, “Is that a duck?”

After something like a wild-goose chase, the grounds crew wrapped the big bird in a towel, placed it into a plastic recycling bin and retreated back into the Dodgers dugout. The crowd cheekily booed, lamenting the end of a break to an otherwise dismal inning for the Dodgers, who trailed by two runs.

“Can confirm that the goose was safely released,” Nicole Singer, vice president of public relations for the Dodgers, wrote in an email. She did not respond to questions about how and where it was set free.

Video of the goose was widely circulated on social media, the latest addition to the entertaining sports sub-genre of wild animals interrupting competition. Yet laughter aside, many users took to Twitter to ask, is the bird okay? And why did the bird land on the field in the first place?

Travis Longcore, president of the Los Angeles Audubon Society and adjunct professor at UCLA, identified the wild bird as a greater white-fronted goose, which he said are an uncommon sight throughout most of the year in urban Los Angeles.

Unlike other species such as Canada geese, which have made homes at parks throughout Los Angeles County, the greater white-fronted geese are only seen during migratory seasons.

They are known to migrate from the arctic tundra in Alaska, where they breed in the summer, and in the fall, fly south along the Pacific, settling in the wetlands in the Central Valley of California or even farther south into Mexico, a flight pattern the bird has carried out for thousands of years, Longcore said.

The bird on Wednesday was likely following this migration pattern when it became distracted by the stadium lights that tower above Chavez Ravine, a common obstacle for migrating birds, said Longcore, whose research includes the effects of light pollution on migratory birds.

Moments before the bird landed on the field, fans had spotted a flock of geese, flying low, near the stadium lights in a “V” formation.

About 80% of birds migrate at night, preferring the cool of darkness, Longcore said. However, lights from structures such as communication towers or skyscrapers can attract birds, causing them to either land within the brightness or circle it in flight.

Often times, light pollution can cause birds to become disoriented and crash into structures, which contributes to the death of millions of migratory birds each year, according to a group of conservationists behind World Migratory Bird Day, which took place last week. The initiative calls on cities to reduce light pollution during peak migration periods in May and October.

“It’s like they get into this zone, and they just won’t go back into the darkness,” Longcore said.

He applauded the grounds crew’s use of a towel, which is key in preventing damage to the bird’s feathers.

And although the Dodgers didn’t disclose how and where they released the bird, Longcore hoped it was near a body of water.

Most white-fronted geese are spotted along bodies of water, such as lakes at MacArthur and Echo parks, at the L.A. River, or in the wetlands of Playa del Rey or the South Bay, Longcore said. The goose Wednesday would have been accustomed to landing in water, which would explain its hard landing on the field, he said.

Garrett had been watching the game from his L.A. home when the unwitting goose interrupted play.

Geese are known to fly together as families, yet even though the bird was separated from its group, Garrett said he isn’t worried about its survival.

He estimated the goose was a year old, a grown adult, given its white trim around its beak and black belly, which means it had made this migration south at least once before.

He assured that geese can survive alone, are strong fliers and are great at finding suitable habitats, food, as well as other geese.

“They’re really good at finding each other,” Garrett said, “And they can survive perfectly fine on their own.”

With October as a peak migration period throughout the world, both expect this won’t be the last clash of playoff baseball and migrating birds.

“I hope it reminds people that even here in Los Angeles, we are still part of the natural world,” Longcore said, “And we can do things to do our part in making it safer for them.” 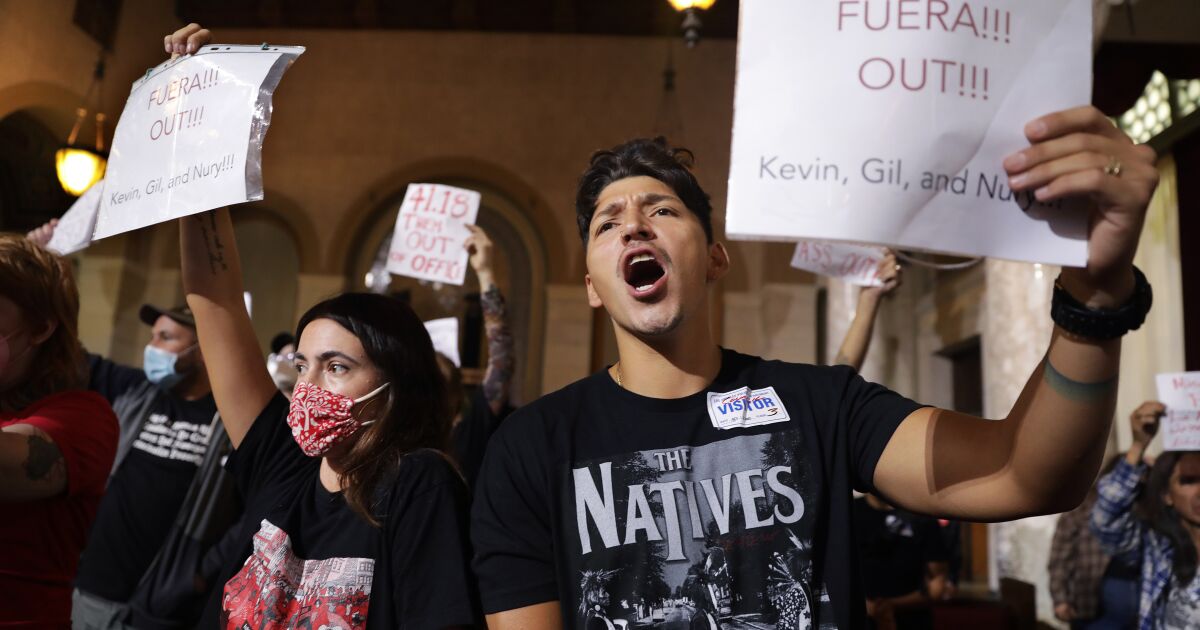 Next Article How all 15 L.A. City Council members have responded to the racist leaked audio

Canadian Prime Minister Justin Trudeau speaks at the NATO summit in Hertford, England, on Dec. 4, 2019. On Friday, he announced a national freeze on […]

Struggling artists need not apply. The former Noho studio and digs where the late, great Jean-Michel Basquiat spent the last five years of his life […]