Op-Ed: The monumental mortality of sequoias


In downtown L.A., in the parking lot of the Automobile Club of Southern California, sits a quaint monument, one century old. It’s a cross section of a giant sequoia, propped on its side, with arrows pointing to tree rings marking era-defining events. Meanwhile, in the Sierra Nevada, thousands of crown-scorched sequoias stand dead as de facto monuments of climate change. With both kinds of de-immortalized Big Trees, Californians can see connections between civilizational time and the temporal condition called the Anthropocene.

The AAA timeline at West Adams Boulevard and Figueroa Street was one of many derived from a single fallen tree in Sequoia National Park. Starting in 1923, the park’s superintendent freely supplied slabs to educational institutions, as long as recipients paid shipping. With each 1.5-ton piece, the National Park Service sent interpretive instructions, including a list of historical events — though no guidance on finding the correct corresponding rings.

By handpicking pivotal moments, curators revealed prejudices. The most variable tag was the penultimate one, for which they turned to whatever appeared to be the latest world historical happening before the felling of this particular mammoth tree — “World War begun” or “Automobile Club founded.”

The earlier tags repeated themselves. I know because I obsessively tracked down 25 cross sections — mostly giant sequoias, plus a few coast redwoods — installed throughout the country in the first half of the 20th century. The following events appeared with greatest frequency:

• Discovery of America by Columbus (21)

These timelines — artifacts of white supremacy — condensed a civilizational narrative: A divinely ordained course of empire moves westward from the Old World to the New, from Christian Rome to Reformation England to the twice-born U.S. republic, with its empire of liberty serving as the endpoint of progress, the final stage in historical time.

In this wooden enforcement of collective memory, famous men carry the banner of advancement. The prominence of Vikings reflected the eugenical valorization of the “Nordic race,” as well as the efforts of Scandinavian immigrants to claim American heritage. Muhammad’s salience is also explicable. WASPy curators would have preferred a marker at AD 0 — “Jesus Christ born” — and, indeed, some went ahead and added the Nativity. Honest ones knew that sequoia slabs available to museums were not quite old enough to be coeval with Christ, and they accepted the prophet (tagged at AD 570) as an Abrahamic placeholder.

These timelines ignored California’s precolonial past. The supposed Point Reyes landing of Sir Francis Drake occasionally merited mention, as did the founding of Spanish missions, but the Golden State before conquest was literally timeless. The privileging of fixed points in linear time nearly guaranteed the erasure of Native histories, irreducible to dated or datable events. The only Indigenous peoples who sometimes got matched to tree rings were Mayas and Aztecs, calendrical peoples who comported with Western ideas of civilization.

The generation of land managers who pinned these tags to sequoia slabs also instituted, with corresponding certitude and racism, the policy of fire suppression in the Sierra Nevada. They attributed a dearth of young sequoias — a fire-adapted species with flame-released cones — to the “savage” pyromania of California Indians. They mocked “Piute forestry.” Suppression became such a shibboleth that Congress in 1922 fobade the use of Sequoia National Park’s firefighting funds for “precautionary fires,” later known as prescribed or controlled burning.

In 1967, federal land managers began to reverse the suppression policy and designated Sequoia National Park as a flagship experiment. The appearance of sequoia seedlings, then saplings, testified to the efficacy of prescribed burning. Famous groves got the treatment first. Unfortunately, the slowness of the process — years of planning, followed by waits for weather windows and political windows — prevented the burning of the whole park once, or even all its ancient groves once, before megadrought began in 2000.

The ongoing aridification is epochal. Using tree rings as proxies for snowpack and summer soil moisture, scientists have determined that this 20-plus-year period is the driest in southwestern North America since AD 800. They attribute nearly half the intensity to anthropogenic forces. In other words, humans’ heat-trapping emissions have turned a normal drought into a 1,000-year drought. Speaking historically, and truthfully, “anthropogenic” is a euphemism for the Global North, especially the British Empire and the United States.

The same post-1960s generation that adjusted fire policy began to revise the California redwood timelines on display at reserves and museums. In response to multiculturalism, the lineup of historical events became more politically correct, though no less androcentric. Today, in a post-truth period of extreme partisanship — a conflagration for U.S. democracy — one could imagine an executive order to ban “critical race theory” from national parks or just the opposite, a Sacramento directive to California state parks to inscribe replacements for the Mayflower’s landing and the Gold Rush: 1619, arrival of the first enslaved Africans in Virginia; 1846, onset of the California genocide.

In 2021, amid a record fire season, the California Legislature passed two bills designed to encourage controlled burns throughout the state, following the historic example of Native peoples, including the participation of “cultural burning liaisons.” This would-be pivotal moment came too late for many sequoia groves in the southern Sierra.

There are good fires, bad fires and terrifying fires. With snowpack melting sooner and faster, and with associated declines in soil moisture and summer humidity, lightning sparks can become superhot infernos that scorch instead of rejuvenate fuel-loaded ecosystems. In the span of one human lifetime, Californians may be witnessing forests of millennial giants convert to chaparral.

Tagged on a timeline, 2020-2021 can be grimly summarized: One in 5 elders of the supremely fire-resistant sequoia species, the planet’s superlative plant, goes up in flames. In reaction to this unprecedented mortality, the U.S. Forest Service announced emergency action to reduce fuel loads in groves in its jurisdiction. In July, the manageable effect of the Washburn fire on Yosemite’s iconic Mariposa Grove — which the park service had treated for decades with prescribed burning — reinforced the wisdom of this move.

But local efforts cannot stop planetary processes. Unless the Biden administration’s Inflation Reduction Act is the first of many future climate bills, no amount of backfiring, sprinkling or foil-wrapping will alter the long-term outlook for big old trees. In the Sierra, they will disappear except for a limited number of intensely managed groves — de facto botanical gardens, or tree museums.

As the drying of California goes on, could cohorts of dead sequoias become lasting monuments of warning about historical hubris? The connected struggles for climate action and civil society in the U.S. will tell. In an optimistic scenario, a political majority will reform old habits of temporal hinking and respond to the demise of emblematic elderflora without invoking the rise and fall of civilizations, or any kind of end times.

In the past, so much harm has been done by those possessing certitude about the inevitable outcome of history. No one has ever known how the timeline ends, and that enduring uncertainty should be reason for hope in action.

Jared Farmer is a professor of history at the University of Pennsylvania, and the author of “Elderflora: A Modern History of Ancient Trees.” @geohumanist

Previous Article How an HBCU helped Black Latinos after slavery 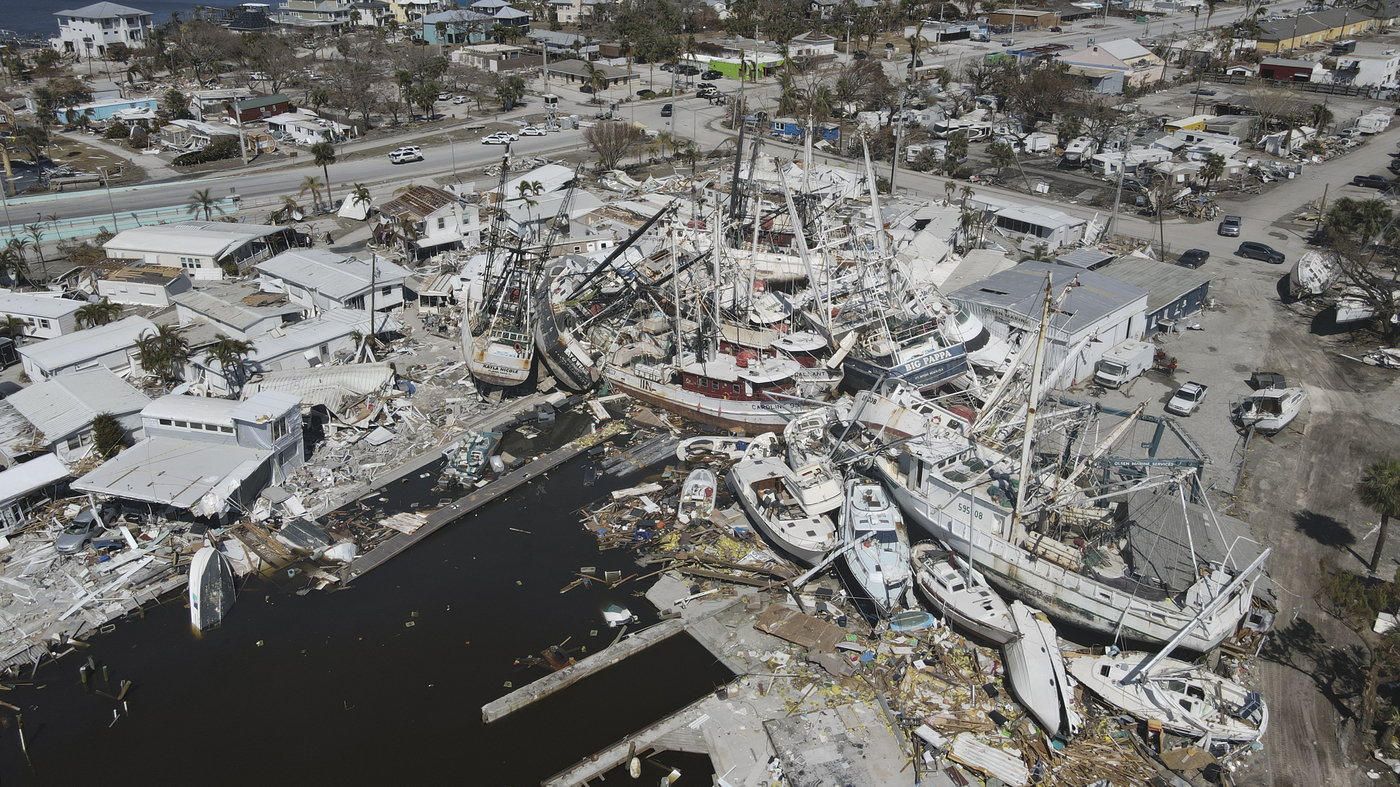 Texas had agreed to the motion as long as the tech groups don’t seek more time to file their petition to the Supreme Court, a […]

President Joe Biden slams Republican members of Congress, who voted against his infrastructure bill for being “socialist,” as hypocrites for now asking his administration for […]

Weakened after his preferred candidates took a drubbing in the midterms and beset by rising Republican rivals like Florida Gov. Ron DeSantis, Trump entered the […]