The Instagram headline was pithy and alarming: “Head of Pfizer Research: Covid Vaccine is Female Sterilization.” And the report, from a murky source, could have had real-world consequences, coming in 2020, just as the U.S. rolled out the first vaccines to combat the coronavirus pandemic.

That made the story a perfect tool for an educator trying to teach high school students how to separate fact from fiction — a survival skill in a culture drowning in a tsunami of information.

Jamie Gregory told the 12th-graders in her seventh-period journalism class to examine the article. But, using lessons from a nonprofit called the News Literacy Project, they understood the best way to get to the truth was not to read deeply in the suspect story, but to check it by shifting away to other sources.

The teenagers soon found stories and academic studies debunking the sterilization claim. A Reuters story made clear that the former Pfizer scientist had drifted far from the scientific mainstream on COVID. Research never corroborated rumors that the vaccine caused impotence in men or placenta failure in women.

“They really had to do the work to figure it out for themselves,” said Gregory, a librarian and journalism teacher at Christ Church Episcopal School in Greenville, S.C. “It felt important that they had developed this skill. And it does make me feel hopeful going forward.”

Gregory is one of a growing number of teachers, librarians, counselors and other educators who are teaching students media literacy — skills like discerning advertising from unpaid content, recognizing the difference between news and commentary and separating unbiased sources from those with ties to industry or political groups.

“Media literacy is literacy in the 21st century,” said Erin McNeill, founder and president of the nearly decade old advocacy group Media Literacy Now. “There is this fire hose of information coming at young people, and they have to know how to cope with it.”

Fifteen states now encourage some form of media literacy education, compared to three in 2011, according to Media Literacy Now. Illinois last year became the first state to mandate such instruction, requiring all high schoolers to take a unit (still to be defined) on issues like “the purpose of media messages and how they are constructed.”

California lawmakers and Gov. Gavin Newsom in 2018 directed the Department of Education to create an online list of media literacy resources. Last month, state officials approved adding media literacy to the list of subjects eligible for funds for teacher training and instructional material.

But while the media literacy movement is growing, so is debate about exactly what the term means.

By its broadest definition, the concept suggests that people who consume media (American 10- to 14-year-olds spend nearly eight hours a day consuming content on phones, computers and televisions) should be better informed about what they take in. That can mean learning about ad placement in movies, sussing out the political roots of television shows and learning who’s behind a TikTok video.

“There are overt and hidden messages throughout media,” said Michelle Ciulla Lipkin, executive director of the National Assn. for Media Literacy Education. “They are in sports, in entertainment, in sitcoms on TV, on film, not just the traditional news.”

In a class she teaches at Brooklyn College in New York, one focus for Lipkin is to get students to understand that what they see on their screens can have as much, or more, impact on their worldview as NPR or some other traditional news source.

“I can’t not talk about ‘black-ish’ in my class,” said Lipkin. “That is a very good example of a sitcom that is bringing deep and intense messaging about race into our living rooms.”

Among the leading organizations in the field is the News Literacy Project, founded in 2008 by Alan Miller, a longtime Los Angeles Times reporter whose career included a Pulitzer Prize-winning investigation into the dangers of a military attack jet.

In the 14 years since it started, initially to help young people better cope with the information onslaught, the organization has shifted its focus to a menu of online video lessons, delivered under the brand name “Checkology.”

Miller said his belief in the need for the teaching has only grown in the last several years, as broad segments of the American populace have been consumed by election denialism, global warming skepticism, COVID conspiracy theories and what former Trump aide Kellyanne Conway once notoriously defended as “alternative facts.”

“We’ve lost any sense of a common narrative, of a shared reality,” said Miller. “We not only can’t agree on what the facts are, we can’t even agree on what a fact is.”

That threatens any chance of a well-informed electorate, said Miller.

Studies have shown that well-meaning individuals across the political spectrum simply have trouble separating fact from fiction.

In what they billed as “the largest investigation of its kind,” Stanford researchers last year assessed how 3,446 high school students interacted with information on the Internet. Two-thirds couldn’t distinguish news from ads on a popular website’s home page. Virtually all of the students were hoodwinked by a website that claimed to offer unbiased facts about climate science that were actually talking points from the fossil fuel industry.

Fortunately, the Stanford group had other research that suggested the learning chasm can be bridged. Exposing high school students to the tools used by professional fact checkers significantly improved their “ability to judge the credibility of digital content,” the researchers found.

One of the key skills, the study found, was what academics call “lateral reading” — jumping away from a suspect article and opening new web tabs to find out more about the credibility of whoever produced the report. Groups like the News Literacy Project are focused on bringing that and other online verification skills to middle school and high school students.

Among students’ favorite fact-checking tools: using Google and other sites to perform “reverse image” searches that can verify the true source of provocative photos that pop up every day on Instagram and TikTok.

At Roosevelt High School in Boyle Heights, teacher Aldo Parral recently walked his students through a News Literacy Project lesson on forms of bias, sometimes fueled by a journalist’s race, background or ideology.

“They let you know what their opinion is, instead of telling you the whole story, and they might not even know they are doing it,” said Adrian Castillo, a senior who plans to go into the Army after graduation. Castillo said he appreciated the news literacy sessions for opening his eyes to all the ways information can be slanted.

Parral and other teachers said the News Literacy Project’s lessons focus on how to gather and process material without an obvious tilt to one political party or ideology.

The lessons poke holes in claims that the 2020 presidential election was fraudulent, and they support the scientific consensus that climate change is driven by human activity. But they also include findings likely to be more pleasing to conservatives.

One recent item in the group’s emailed newsletter for educators, for example, debunked an online list of books purportedly banned by the state of Florida. (While some school districts had removed books, the state had taken no decisive action.) Another showed how a photograph of Republican Senate candidate Dr. Mehmet Oz had been doctored to make it appear that Oz was kissing Donald Trump’s star on the Hollywood Walk of Fame.

“You have to question things and not just accept them on face value,” said Melanie Lundquist, an El Segundo-based philanthropist who, along with her husband, has committed $10 million to support a major expansion of the News Literacy Project’s efforts. “A society where no one questions things is not going to be a very strong society.”

“The misinformation crisis that faces our country feels like a very real threat,” added Lundquist, whose family has also pledged $85 million to support 20 of the neediest public schools in Los Angeles.

Miller said the News Literacy Project wants to make a strong push to reach more adults because of the upcoming midterm election and the looming contest for the White House in 2024.

One initiative the organization launched in October is “RumorGuard.” The name is a double entendre — its online reports intend to knock down false news reports, while also urging citizens to become part of a guard of informed citizens who tell their neighbors not to spread bad information.

“With RumorGuard, we are building a collective effort to stop the spread of harmful content,” said Peter Adams, the News Literacy Project’s senior vice president of research and design.

The News Literacy Project reports that its lessons and platforms have reached more than 370,000 students nationally since 2016. The bulk are in big cities like New York and Chicago, but teachers like Greenville’s Gregory have brought the learning to more conservative states, including South Carolina, Alabama and Texas.

The last time the News Literacy Project surveyed its students, it found that those who had taken its Checkology classes made marked improvements in skills such as identifying online postings that did not include credible information. The survey of more than 10,000 students found that young people’s overall skepticism was, if anything, too well developed. Only one-quarter of those who had taken basic Checkology courses correctly stated that not all information is designed to mislead.

A raft of other schools, universities and nonprofits have also waded into the work of teaching people to discern and disarm misinformation.

At Stony Brook University in New York, where Howard Schneider, the former editor in chief of Long Island Newsday, started a journalism program in 2005, more than 11,000 students, mostly non-journalists, have been through a media literacy class.

At Webster University in St. Louis, Julie Smith, a pioneer in the field, tells teachers that prohibitions and ominous warnings about online threats won’t reach young people raised as digital natives. Instructors can only gain credibility with humor and by invoking real-world examples about information gone wrong, she says.

“Because nobody likes to be fooled,” said Smith. “But we now live in a polarization-industrial complex, where no one ever, ever, ever likes to admit they are wrong.”

“We see this from people in public life, from celebrities, from institutions,” said Smith. “So it’s no surprise we see it in students too. We need to model honesty and a willingness to acknowledge what we don’t know.”

Over the last decade, Lipkin, the Brooklyn teacher and activist, has seen her media literacy umbrella group grow from fewer than 300 members to 7,000, most of them educators, from kindergarten through college.

The media educators intend to create a new generation, more mindful about what it consumes and projects via media. One young exemplar could be Mirudulaa Suginathan Yamini.

After completing many of the News Literacy Project’s courses, the 10th-grader from Quincy, Mass., says she feels a new responsibility.

“Our society has a value system, and you don’t want to degrade it by spreading misinformation,” she said. “I want to be part of a society that gets things right.” 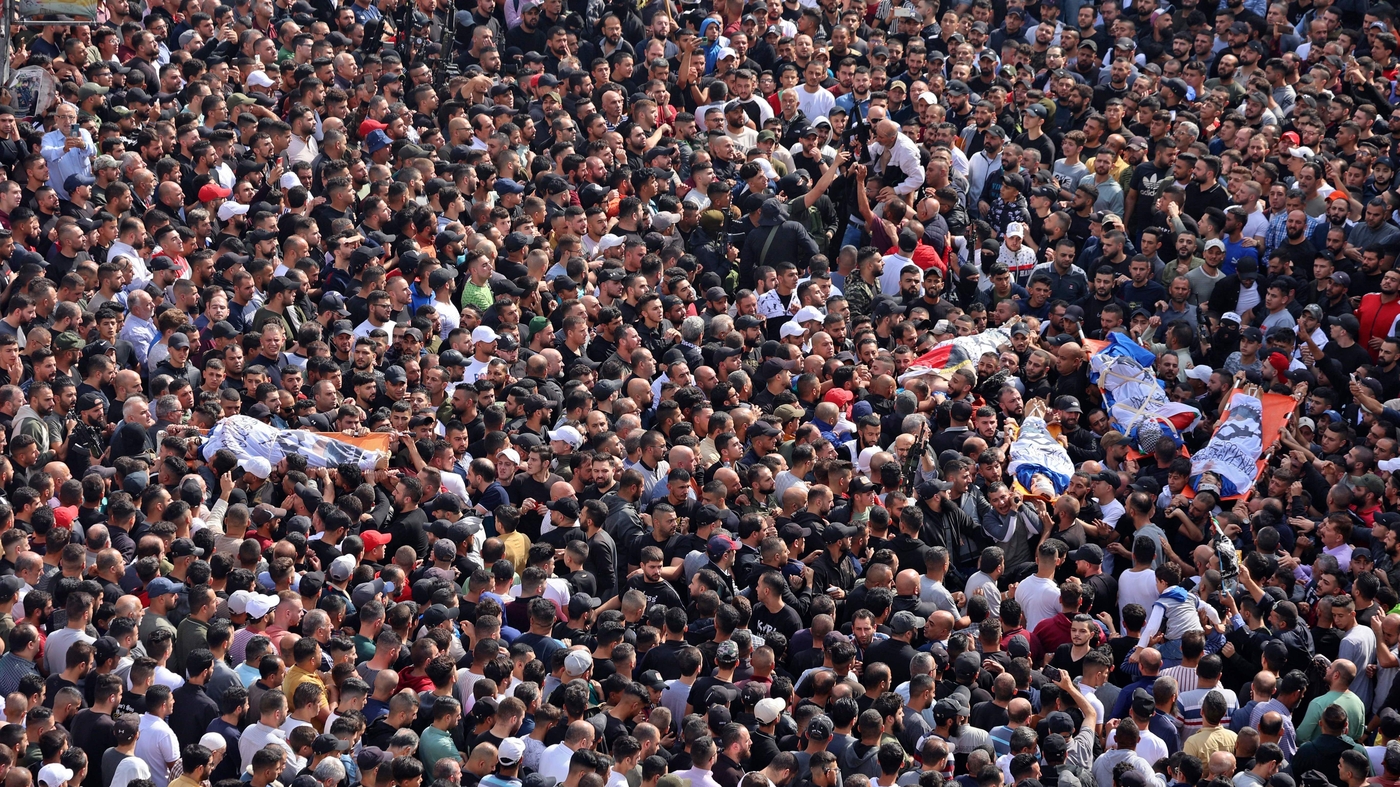 Next Article Who is Lions’ Den, a new Palestinian group Israeli forces attacked in the West Bank?

Biden torched for agreeing to climate reparations: Is this an ‘Onion’ headline?

The U.S. and Canada sent armored vehicles and supplies to Haiti to help fight a gang

The New York Times is facing blow back from across the political spectrum over its report delving into the potential consequences of puberty blockers, which […]