Los Feliz residents Cylin Busby and Damon Ross were returning home Saturday night after seeing the horror movie “Barbarian,” in which a young woman enters a rental home and is startled to discover an unexpected guest.

As they drove up to their house near Griffith Park, the couple spotted the silhouette of a large and imposing figure in their driveway. They had seen coyotes and raccoons in the neighborhood before, but nothing like this.

“Coming from this movie, we were particularly on edge,” said Ross, a 50-year-old producer at DreamWorks Animation.

It turned out to be what they believe is the mountain lion known as P-22, plopped in front of their house, just a few feet from the car. The cougar has long lived in the Griffith Park area.

P-22 surprised the world when he first appeared a decade ago in the park, which scientists had considered too urban and too small to support mountain lions. Scientists assumed that he would eventually leave the park, but he has remained, eating mule deer and raccoons and occasionally appearing on surveillance cameras, creating a media frenzy.

On this occasion, the animal appeared to be calm and comfortable in his surroundings.

“He was lying down as if he’s about to take a nap,” said Busby, a 52-year-old screenwriter and author of several books, including one loosely based on Franny, a feline who lives in Los Feliz’s Skylight Books.

As the couple locked eyes with the mountain lion, Ross reached for his cellphone to snap a picture.

“We were far more anxious than he was,” Ross said.

At first the couple wasn’t sure what to do. Should they call police? What if the mountain lion jumped on the car?

“I was Googling, who do I call?” said Busby, who has lived in the area for 12 years but had never seen a mountain lion before. “I wasn’t about to pull down a window, and I don’t want to disturb him, but we also eventually have to get into our house.”

Ana Beatriz Cholo, a spokesperson for the National Park Service’s Santa Monica Mountains area, said she has not confirmed whether the mountain lion was P-22.

“But there aren’t any other mountain lions living in Griffith Park or in that area,” she said, adding that it is not unusual for P-22 to venture outside the park.

Ever since National Geographic in 2013 released a photo of P-22 roaming in the hills beneath the Hollywood sign, he has been a celebrity. In addition to his glossy spread in the magazine, he is the subject of a documentary and a Natural History Museum exhibit. By order of the City Council, Oct. 22 in Los Angeles is “P-22 Day.”

Despite their intimidating presence, mountain lions rarely attack humans, said Tiffany Yap, a senior scientist at the Arizona-based Center for Biological Diversity. It seems the animals are the ones that have more to fear in an urban environment, as more than 100 are killed on roads every year in California, Yap said.

“This is a great example of why we need to think about how to safely coexist with the wildlife around us,” Yap said of the couple’s sighting, adding that Ross and Busby did a great job by staying in their car and waiting for the mountain lion to leave.

Three or four minutes after he was spotted, the mountain lion scampered toward the olive trees in the hillside next to the couple’s home. He disappeared, showed up on a neighbor’s security camera 90 minutes later, then disappeared once again.

“It was a close-up glimpse of a true natural beauty,” Busby said. “He was a really handsome cat.”

The couple has a rescue tabby cat, Billie Jean, who “is not terribly thrilled that all the attention is not on her,” Ross said.

He has worked with Sam Rockwell and Jack Black, but Saturday marked “the best celebrity sighting we’ve ever seen.”

Still, Busby saw a bit of sadness in the puma’s eyes.

“The story that resonates most with people, if I can speak for my husband and I, is that he is alone over here. He has no name. He has no companions,” she said. “You can’t help but feel a little sad for him.” 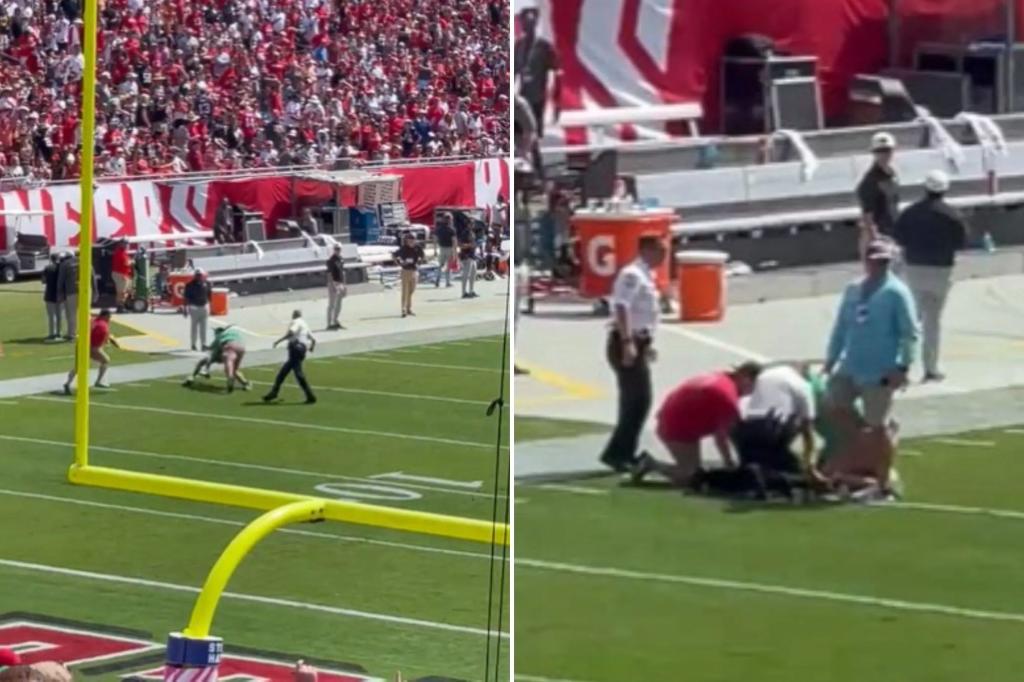 Flu is being detected at increased levels for this time of year in Southern California, a trend that officials say could foreshadow a difficult season […]

Discover startups, services, products and more from our partner StackCommerce. New York Post may be compensated and/or receive an affiliate commission if you buy through […]