Los Angeles is running out of water, and time. Are leaders willing to act?


On a clear afternoon recently, Mayor Eric Garcetti looked down at the Hollywood Reservoir from 1,200 feet in the air.

“It’s as low as I can ever remember it being,” Garcetti said of the reservoir from the back seat of a Los Angeles Department of Water and Power helicopter. “You can see the bathtub ring.”

The aerial survey of L.A.’s water infrastructure came at a critical moment. Over the last decade, the city has made significant investments in its future, including major projects to expand its ability to capture, store and recycle water. But now, on the eve of an election, much of the work remains unfinished — with target dates for some major water projects set as far as 2050.

With the city facing what is sure to be one of the hottest, driest and most challenging climate eras on record, it is essential that its next leader sees the work through to completion, Garcetti said.

By now, it is clear that water independence is the best path forward for the 4 million residents of the city of Los Angeles, and for the county and region as a whole. Imported supplies from the State Water Project are heavily dependent on annual snowpack and rainfall in the Sierra, which are no longer a guarantee under the state’s shifting climate regime. What’s more, long-reliable federal supplies from the Colorado River are rapidly drying up, with the river’s largest reservoir, Lake Mead, nearing dangerously low levels.

In certain ways, the city is in better shape than some other major metropolitan areas because of the Los Angeles Aqueduct system, two pipelines that deliver water from the Mono Basin and Owens River hundreds of miles away. But even that supply — much of it secured by stealth and deception more than 100 years ago — is heavily reliant on Sierra snowmelt.

“The reality is most Angelenos, most people, haven’t thought about water their entire lives because it’s been reliable,” said Evelyn Cortez-Davis, director of water engineering and technical services at the DWP. But as the helicopter zoomed over the area’s drought-dried hills and heat-sapped reservoirs, the urgency of the work came clearly into focus.

Garcetti said that neither of the two candidates seeking to replace him has reached out to discuss the city’s water goals. However, in emails to The Times, both Rep. Karen Bass and Rick Caruso said they believed Los Angeles must reduce its reliance on imported water.

Bass, who helped pass a major overhaul of the state’s water system in 2009, said her top water priority as mayor would be modernizing aging infrastructure. She also said she would focus on ensuring the quality of drinking water for the city’s residents, noting that communities of color are often hit hardest by environmental inequities.

“There’s no one solution — but by choosing a strategic balance, with investments in strategies like water conservation, landscape transformation, rainwater capture, groundwater recharge, and the protection of our imported supplies, we will ensure a more sustainable water future,” Bass wrote. She added that “there is more we can do to reduce our reliance on imported water, which begins with more aggressive conservation measures.”

Caruso, a former DWP commissioner, said the next few years are critical. He underscored the need for more efficient water use and said water recycling and groundwater recharge would be his top priorities.

“Drought impacts all of us, and we must work collectively to reduce our water usage while working to quickly and efficiently expand our groundwater recharge and recycling efforts,” Caruso wrote. He said he would “work diligently to expand the use of recycled water for non-potable purposes and to ensure that all commercial and industrial users who want or need access to recycled water can achieve it easily — it won’t happen quickly, but we must prioritize it.”

Most experts agree that wastewater recycling — or the capture and treatment of water for reuse — is among the most important steps for achieving greater self-reliance in Los Angeles. Currently, recycled water makes up only about 2% of the city’s drinking water, but officials hope to one day see that amount at 35% or higher.

There are a few projects underway to help get there. For one, a direct potable reuse facility near the Headworks Reservoir, just north of Griffith Park, is expected to become the first facility in the state to put purified recycled water directly back into the drinking system, serving as proof of concept, officials said. It is slated to come online within the next five years.

The DWP also aims to recycle 100% of its available wastewater from the Donald C. Tillman water reclamation plant in Van Nuys, which will be used to replenish the San Fernando groundwater basin and will produce enough drinking water for more than 200,000 people each year. That project is slated for completion by 2027.

But perhaps most ambitious is the conversion of the massive Hyperion Water Reclamation Plant in Santa Monica into an advanced water purification facility by 2035. The plant currently treats wastewater only enough to release it back into Santa Monica Bay, but when the work is completed, it will produce enough water for 2 million people.

“It will dwarf everything else,” Garcetti said of the project.

Gregory Pierce, co-director of the Luskin Center for Innovation at UCLA, said Los Angeles is “somewhat of a leader” when it comes to water recycling, and that Hyperion may be the DWP’s “largest investment since the Mulholland days.”

The project “is a little bit late, obviously, but I think it will be early enough to avoid complete disaster in terms of people actually running out of water, and having to ration much more radically than we are right now,” he said.

The DWP is also focusing on improving its ability to capture and treat more stormwater before it escapes to the sea. Though the county passed Measure W, legislation to help bolster some of that work, a Times review earlier this year found that officials had been slow to dole out funds.

There has been some progress, however, including the enhancement of a spreading grounds facility in Tujunga, which collects stormwater and infiltrates it into the San Fernando Valley groundwater basin in a process known as recharge. The project has doubled the facility’s ability to capture stormwater from 8,000 acre-feet per year to 16,000 — or roughly 5 billion gallons, Cortez-Davis said.

In his email, Caruso said he wanted to see L.A. County’s efforts on stormwater capture and recycling “much more aligned and in congruence with City efforts,” and that both entities should mandate that more projects use graywater and recycled water for non-potable purposes.

Bass said that she would partner with the DWP on infrastructure and landscape programs to “make sure we capture every drop” and that she would “expedite the stormwater capture projects that were made possible by Measure W.”

But part of the challenge when it comes to L.A.’s groundwater is pollution, including portions of the San Fernando Valley groundwater basin that were declared Superfund sites after chemicals seeped into the aquifer from industrial disposal and storage pits decades ago.

Cortez-Davis said the DWP is moving forward with remediation efforts after years of being stuck in legal limbo waiting for responsible parties to take ownership of the pollutants. Among other steps, the treatment includes pumping water and disinfecting it with ultraviolet light and activated carbon, she said.

“It used to be way too expensive and we had cheaper options [than remediation],” he said. “But now it’s finally here because there are no cheaper options, and because the technology has gotten there, so I think now is the time. DWP has already begun cleaning that up, and that’s going to be really useful for the city.”

He also underscored that current conservation efforts should become permanent in the face of water uncertainty. So far, Angelenos have more than risen to the challenge — achieving record-low demand in June, July and August this year, according to the DWP.

Cortez-Davis noted that the city has kept its water use at roughly 1970 levels despite growing by more than a million people since then.

But water is only one of many issues facing the residents of Los Angeles. Garcetti said he tends to think of the city’s challenges as “short, medium and long-term,” with issues such as COVID-19 and public safety in the “short-term” category and housing and homelessness in the “medium-term” category.

“But long-term is climate. It is the one crisis that won’t go away in our lifetime,” he said.

Among other plans, Bass said she wanted to update the open space element of the city’s General Plan to make parks and open areas into “water resilient places” that can capture stormwater and naturally recharge groundwater basins.

“This is an existential crisis that will take all of us to do our part, and we will need the support of the federal and state governments to undertake the big projects that will be necessary to build water self-reliance in L.A.,” she said.

Caruso said expanding the city’s network of recycling water pipes for non-industrial and commercial uses, including irrigation, would “significantly reduce our water usage as a region.”

“There are many cities around the world that manage drought effectively and efficiently, and we must work aggressively to adapt to climate change and its impacts on our society,” he said.

Both Bass and Caruso said they wanted to help Angelenos continue to transition toward more efficient water use practices and drought-tolerant landscaping.

Garcetti said he believes either candidate will be able to see the city’s water goals through to completion — so long as they stay the course.

“I have high confidence that, as long as they don’t undo it, they’ll be able to execute,” he said. But as the helicopter whirred back toward the DWP rooftop in downtown L.A., he also acknowledged that nearly 10 years as mayor taught him that things don’t always go as planned. 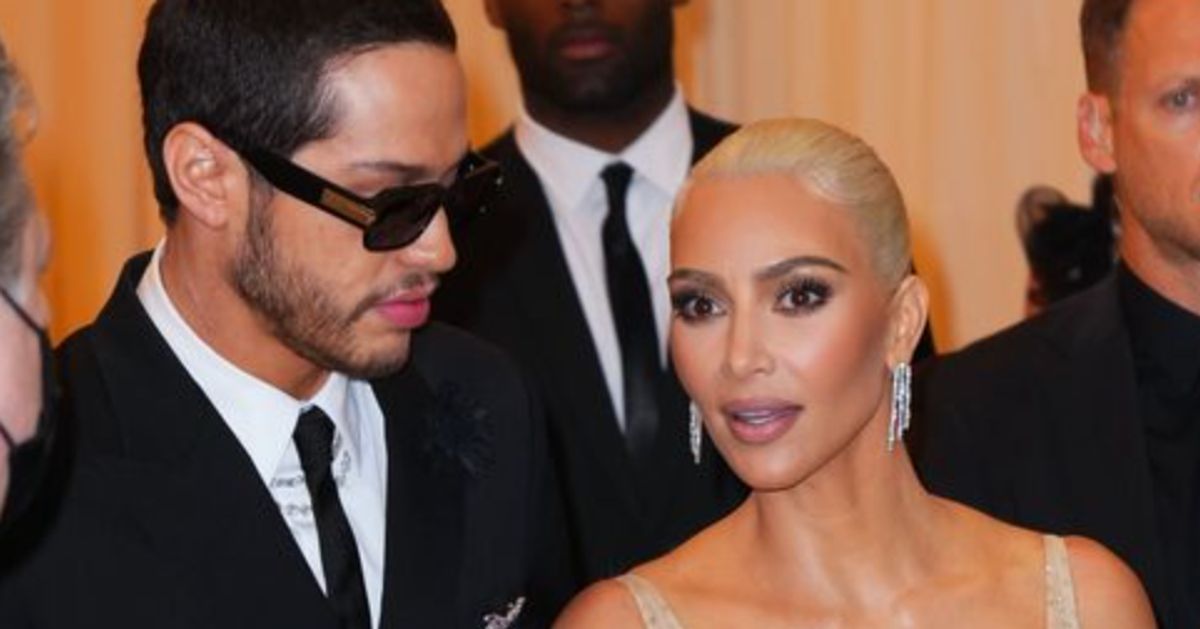 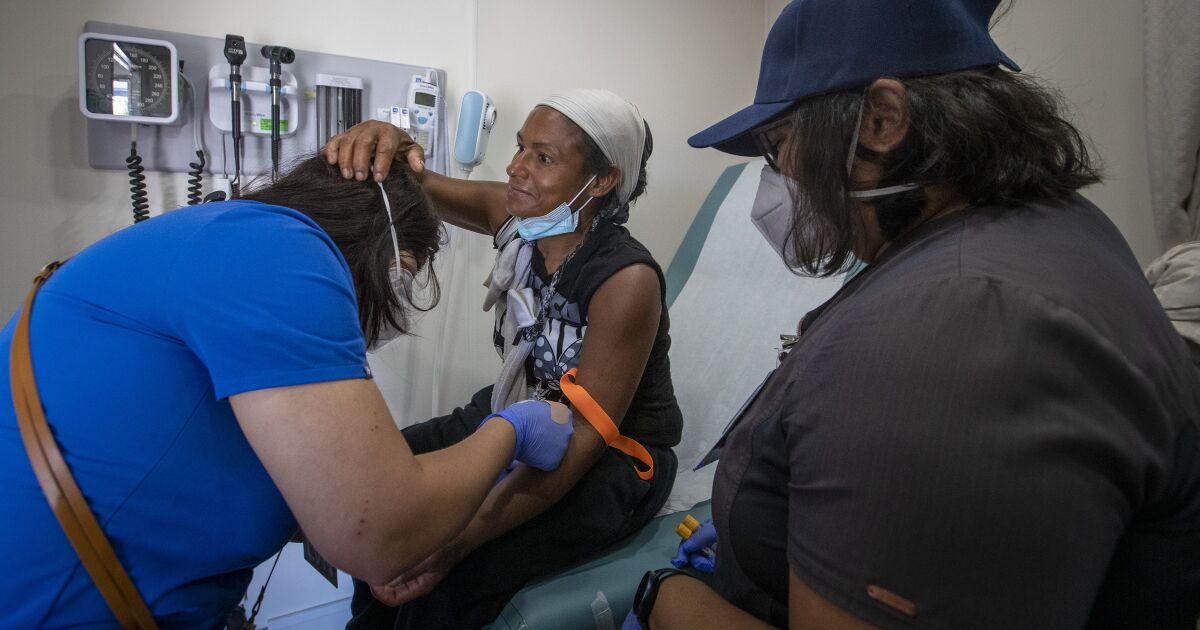 Next Article ‘Medical care right where you are’: L.A. County launches mobile clinics as big as semis

A St. Paul, Minnesota, man who drove a car into a group of Minneapolis protesters in June 2021, killing one person, was sentenced on Wednesday […]

Katherine Ryan has claimed that a very prominent British TV personality is a “perpetrator of sexual assault.” The Canadian comedian, 39, said she previously confronted […]

As Republicans prepare to take over the House with a narrow majority, House Democrats’ largest moderate faction, the New Democrat Coalition, is poised to play […]