Businessman Rick Caruso will end his campaign for mayor of Los Angeles much as he started it — pounding away with a television advertising campaign that attempts to persuade Angelenos he is the kind of independent problem solver who can overcome entrenched and corrupt interests at City Hall.

In spending about 13 times more than his opponent, Rep. Karen Bass, Caruso’s advertising onslaught on TV, radio and digital platforms is expected to exceed $53 million, enough to help define themes for the race but not enough to ensure victory, according to several political professionals watching the contest. Those numbers encompass what both candidates are slated to spend through the primary and general elections, according to data from media tracking firm AdImpact.

Despite the lopsided spending, Bass appeared to remain the strong front-runner through the summer and into the fall. Polling conducted in late September put Bass 15 points ahead of Caruso among likely voters and 3 points ahead — within the poll’s margin of error — among all voters.

But the race is widely believed to have tightened in recent weeks, likely at least in part due to the $3 million to $4 million a week that Caruso has spent on advertising since the beginning of the month.

Campaign experts said ad attacks by both sides appear to be less ferocious than in some past mayoral campaigns and perhaps tempered by race and gender, with Bass constrained by more intense scrutiny that sometimes confronts women and candidates of color and Caruso intent on avoiding charges that his appeals are sexist or racist.

With no single ad or image dominating, it’s the sheer size of Caruso’s advantage that will leave the most lasting impression of the 2022 campaign. Caruso is sometimes recognized at campaign stops by Angelenos who have no real idea who he is — beyond the certainty that he must be famous because they’ve seen him on TV.

“Caruso’s ad campaign has been a 12-course meal complete with wine pairings and little palate cleansers of negative ads on Karen Bass,” said John Shallman, a veteran consultant who previously advised mayoral candidate and City Atty. Mike Feuer. “By comparison, Bass is trying to serve a home-cooked meal for a sold-out Dodger Stadium with just barely enough to feed the grounds crew.”

Robert Shrum, director of USC’s Center for the Political Future, agreed that studies have shown that “the amount of advertising is at least as important as the content of the advertising. By that throw-weight standard, it’s clear and undeniable that Caruso has an advantage.”

A little less than half of Caruso’s ad spending has come since he finished second to Bass in the first round of voting in June. His $25.7 million since then is eight times as much as Bass’s $3.2 million, according to data from AdImpact.

Caruso has had nearly a dozen ads on TV in recent months, while Bass has put a little more than $3 million behind a single 30-second TV spot.

Caruso’s TV commercials since the primary have run the gamut, including a number of biographical spots, Spanish and English ads contrasting his homelessness plan with Bass’, and two attack spots — one targeting the controversial scholarship she received for graduate school at USC and another highlighting a speech Bass gave praising Scientology.

Though the Scientology ad was on TV for just under a week in late September and early October, the Caruso campaign put more money behind it than nearly any other ad, according to data from AdImpact.

The ad replays a 2010 speech in which Bass speaks warmly about Scientology and its “universal creed.” It contrasts Bass’ positive remarks with descriptions of the church from news organizations that characterize Scientology as “homophobic” and “a ruthless global scam.”

Bass said she made the appearance at a time she was not fully aware of Scientology’s “abuses.” Her campaign said she condemned those actions when she became better informed about them.

Caruso’s other ads have highlighted his family’s immigrant story, Boyle Heights lineage and his business background. Last week, the businessman’s campaign launched an ad that lumps Bass in with other “career L.A. politicians” — a spot that features a montage of headlines about corruption and “City Hall in Chaos.”

The ad features images of not only Mitchell Englander and Jose Huizar — council members snared in corruption investigations — but photos of Nury Martinez, the council president who resigned after an audio recording revealed her and other city lawmakers in a raw and sometimes racist discussion of the city’s redistricting process. The ad pitches Caruso as the antidote to entrenched city pols, an outsider who will “serve no one but L.A. voters.”

Bass’ much more limited advertising budget — a little more than $4.1 million, compared with Caruso’s $53.3 million, mostly from his personal funds — has gone largely to a biographical ad, “Way Forward,” which opens with an image of the congresswoman and her colleague in the U.S. House, the late Rep. John Lewis. The spot depicts her as a battle-tested leader who has successfully navigated various crises as a lawmaker.

Dermot Givens, a lawyer and political consultant, said he sees both Bass and Caruso “pulling their punches” — during debates and in their advertising appeals — so bad feelings will not rebound back onto them.

“The stereotype Karen has to play against is that of ‘the angry Black woman.’ She doesn’t want to be accused of that,” said Givens, who is Black. “So she has to be the nice Black woman. And that’s what she is doing.”

Ange-Marie Hancock Alfaro, chair of USC’s political science and international relations department, said research shows that negative advertising can boomerang on female candidates more strongly than it does on male candidates. Hancock Alfaro said this stems from societal expectations that women candidates should be “warm and fuzzy.”

Givens said he felt Caruso also has been less than full-throated in his attacks on Bass, who if elected would be the first woman to serve as Los Angeles mayor.

Givens said that before the campaign began he consulted with other candidates who were considering a run for mayor. He said they all believed Bass’ identity and status as the early front-runner would make her hard to challenge.

“We are in a time when Black women have been identified as the core of the Democratic Party. We have Kamala Harris in the White House,” Givens said. “Nobody felt like they wanted to attack [Bass], to do a hit piece, in what feels like the age of Black women.”

The attacks from the Bass side are coming from groups not directly tied to her campaign. A pro-Bass political action committee largely funded by unions and Hollywood donors is putting $1 million behind a TV ad that juxtaposes images of Caruso with Senate Republican leader Mitch McConnell and castigates the developer for donations to “pro-gun and antiabortion Republicans.”

The PAC — which cannot legally coordinate with Bass’ campaign — has taken on an attack dog role in the race, frequently branding Caruso as a liar in a series of digital ads that also criticize his time on the Police Commission.

Another outside group, the Southwest Regional Council of Carpenters, plans to spend a little more $2 million through Nov. 8 airing a Spanish-language TV ad in support of Bass’ campaign, according to a union spokesperson.

Caruso registered as a Democrat shortly before entering the mayoral race, and his prior membership in the Republican Party has been a theme Bass has hammered on in heavily Democratic Los Angeles.

The fact that Caruso has supported politicians who opposed abortion and has expressed his own doubts about abortion rights, according to a 2007 Los Angeles magazine story that the developer has since disputed, has provided a rich vein of attack for Bass allies.

The Bass campaign has cut a number of negative digital ads targeting Caruso, including one centered on abortion, but the Democratic lawmaker has put very limited financial backing behind those videos, according to the campaign.

During the campaign, Caruso has said repeatedly that he supports a woman’s right to make her own decisions about abortion, without government interference.

The hits on Caruso strongly echo Councilmember Michael Woo’s jabs at Republican businessman Richard Riordan during their 1993 showdown for mayor. Woo hit Riordan as a Republican “wheeler-dealer who got rich off Reaganomics.” Another ad juxtaposed Riordan’s claims that he supported abortion rights with a clip from a cable TV interview in which he described his mixed emotions and belief that abortion amounted to “murder.”

Riordan also provided a prequel of arguments Caruso is making against Bass today, portraying Woo as a part of the City Hall establishment that needed to be shaken up to turn L.A. around after civil unrest ravaged the city in 1992.

In another ad that began airing in mid-October, Caruso made a tactical shift. During the primary campaign, the real estate magnate typically sought to avoid discussion about his partisan political evolution, but he addressed the subject head-on in the new spot.

“You might have heard I used to be a Republican,” Caruso says. “But the Republican Party shifted to a place that didn’t represent my values. So I left.” He also reiterated that, on abortion, “I am pro-choice. And I will defend that with all my might.”

Shrum, who previously ran regional and national political campaigns for Democrats, said he thought that was an important message for Caruso to get out, but one that he should have gotten out earlier, instead of “playing catch-up.” 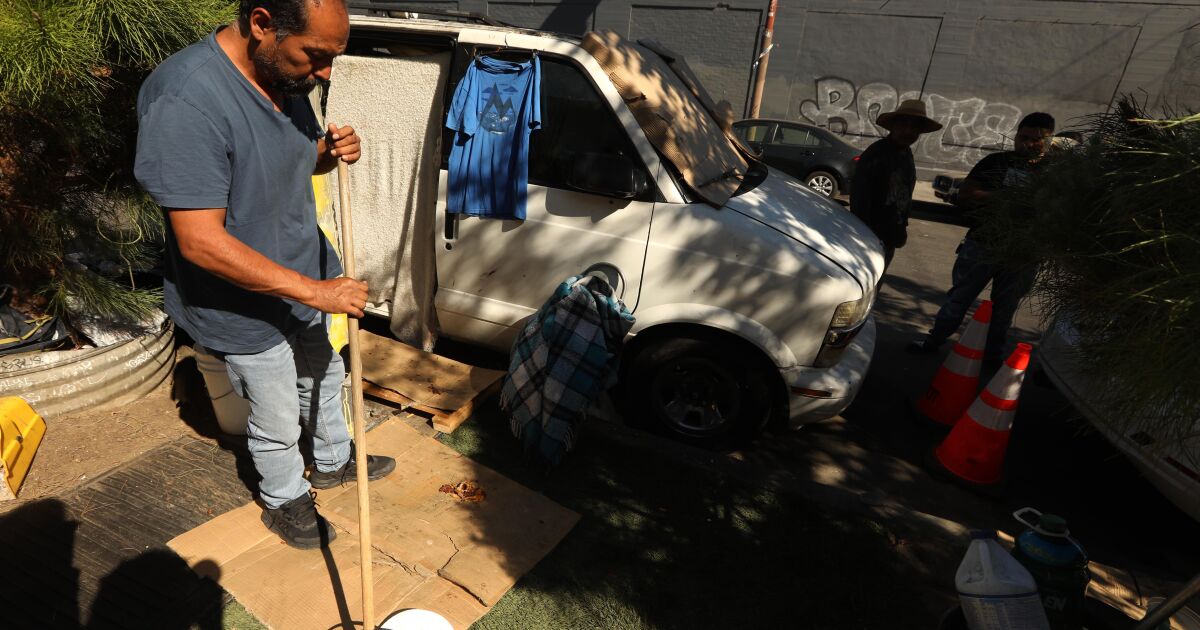 Crisp days and early sunsets can only mean one thing: The holidays are right around the corner. And with millions of products, great prices and […]

Today, you’ll find a deal on the GE Profile Opal Nugget Ice Maker, discounted Onsen towels and savings on our favorite meat thermometer. All that […]