The conspiracy theorist has said the elementary school massacre was a hoax. Plus, domestic security correspondent Josh Meyer looks at President Joe Biden’s ‘nuclear armageddon’ comments, the U.S. and allies strengthen Ukraine’s air defense, the Jan. 6 committee holds another hearing and social security recipients will soon get a boost.

Hit play on the player above to hear the podcast and follow along with the transcript below. This transcript was automatically generated, and then edited for clarity in its current form. There may be some differences between the audio and the text.

Good morning. I’m Taylor Wilson and this is 5 Things you need to know Thursday, the 13th of October, 2022. Today another Sandy Hook related lawsuit against Alex Jones, plus a look at Biden’s comments on nuclear Armageddon and more.

Here are some of the top headlines:

A Connecticut jury has ordered Alex Jones to pay nearly a billion dollars for lies about the Sandy Hook Elementary School massacre. The $965 million verdict is the second big judgment against the conspiracy theorist after he relentlessly spread a lie that the 2012 tragedy never actually happened. In reality, the shooting left 27 dead, not including the gunman, with 20 children slaughtered. Alex Jones had also said that grieving family members seen in news coverage were actors hired as part of a plot to take away people’s guns. But relatives of five children and three educators killed in the shooting, along with an FBI agent among the first responders to the scene, filed this latest lawsuit. Previously, a Texas jury in August awarded nearly $50 million to the parents of another murdered child.

This latest suit accuses Jones and his Infowars website’s parent company, Free Speech Systems, of using the mass killing to build his audience and make millions of dollars. Experts testified that his audience ballooned when he made Sandy Hook a topic on his show, as did his revenue from product sales. In both the Connecticut and Texas suits, judges found the company liable for damages by default after Jones failed to cooperate with court rules on sharing evidence, including Infowars financial records. Attorney Tre Lovell said Jones’ legal defense in this latest suit hurt his case.

I wasn’t that surprised in the sense that Jones really dug his own grave on this. He got himself caught in a default situation where they chose through their litigation tactics to get in trouble, get default, and go straight to damages, which was a really misstep. Because a case like this in defamation with an actual malice standard, they’re tough to win. And had he not done that, had he participated in the process, he may be able to defend or put up a good fight. There’s a few moves he can make, he certainly can appeal both the damages award. He may be able to appeal the default and he has the option of bankruptcy. It does have implications for freedom of speech, but I think they’re good, and it’s going to have an effect on other organizations, the media as well as others in the public that hey, we’re not completely immune from liability because of the First Amendment. You can poke through it on the right facts.

Victims family members were emotional after the verdict. Robbie Parker lost his six year old daughter Emily in the tragedy.

All I can really say is that I’m just proud that what we were able to accomplish was just to simply tell the truth and it shouldn’t be this hard and it shouldn’t be this scary. I shouldn’t have to worry about what my daughter’s going to go through when I tell them that it’s best that they just tell the truth. Because that’s all we did. Every day in that courtroom we got up on the stand and we told the truth. Everybody that took the stand told the truth, except for one, the one who proclaims that that’s what he does.

Jones now faces a third trial in Texas around the end of the year. That one centers around a lawsuit filed by the parents of another child killed in the shooting. It’s not clear how much of the verdicts Jones can currently afford to pay. He previously said he could not afford any judgment beyond $2 million. Free Speech Systems has filed for bankruptcy. But an economist previously testified in Texas that Jones and his company were worth as much as $270 million.

Last week, President Joe Biden said the world is now at a higher risk of nuclear Armageddon than at any time since the Cuban Missile Crisis. The comments come as Russian President Vladimir Putin uses increasingly threatening language about the possibility of using a nuclear weapon as his war in Ukraine faces building losses. And nuclear security experts who spoke with USA TODAY agreed with the president’s assessment. Producer PJ Elliott spoke with Domestic security correspondent Josh Meyer to find out more.

It’s hard to tell exactly how closer we are to a nuclear Armageddon, if we’re close at all. Just nuclear security experts that we’ve talked to say that we are at the closest point we have been since the 1962 Cuban Missile Crisis, mostly because Putin’s been planning for this potential scenario for decades and he’s now threatening to use nuclear weapons in Ukraine. So it’s a serious threat that we have to consider.

Why would he use those weapons against Ukraine? Why now?

I think that there’s a common misconception that it’s kind of an all or nothing proposition that nuclear weapons will annihilate a whole continent or something, but there are tactical or battlefield nukes. And Putin has been, since he took power in 1999, he’s been incorporating these kinds of weapons into their nuclear and military doctrine. So these are much more precise weapons that you can use to gain a particular advantage or outcome on a battlefield and send a message to people not to mess with you, that we might use bigger nukes in the future.

So you wrote about a more likely but still terrifying scenario. Can you go into what that would look like?

There’s a couple of options. One is that they use something of a more conventional variety. They have one weapon that they developed almost 60 years ago called the Tsar Bomba, named after the Russian czars, that even back then was the world’s largest thermo nuclear explosion. 50 million tons of conventional explosives created a 37 mile high mushroom cloud. But what’s a much more likely, but still terrifying scenario, is that they use just these more tactical weapons – non-strategic, smaller, more tactical nuclear warheads that it can attach to one of its many missile systems.

What’s especially of concern is they have a highly accurate missile called the Iskander missile, and that they could use that to target a very specific area within Ukraine with a small nuclear warhead. But they do have a wide range of options, including several thousand tactical nukes with varying yields that could couple with an array of delivery options.

You can find a link to Josh’s full story in today’s episode description.

Russia’s recent retaliation to the presumed Ukrainian bombing of a bridge to Crimea is leading to even more Western support for Ukraine. The US and other NATO members pledged their immediate and longstanding support yesterday for the country. Ukraine’s President Volodymyr Zelensky asked this week for air defense systems to help civilians. And yesterday Ukraine said it received an IRIS-T air defense system from Germany and four more high mobility artillery rocket systems from the United States. The US also plans to send Ukraine eight national advanced surface to air missile systems with two expected to be delivered soon.

Ukraine has not taken responsibility for the truck bomb attack that Russia says killed three on the major bridge. But Russia responded by unleashing a series of missile attacks across Ukraine this week, including on places like the capital Kyiv, which had not seen most of the war’s violence for months.

The January 6th committee will pick up with another hearing into the Capitol attack today. PJ Elliott spoke with reporter Tami Abdollah for a preview.

So this ninth and possibly final January 6th committee hearing was rescheduled due to Hurricane Ian from earlier this month and it’s taking place today. The committee hasn’t said what its agenda is or what witnesses we’ll be hearing from, but there have been discussions about hearing from or dealing with information that touches on the political operative Roger Stone, the members of President Donald Trump’s cabinets, and those who discussed removing him from office. They’ve also discussed talking about potentially the fake electors the Trump campaign organized in states that President Joe Biden won and Trump’s fundraising efforts after the 2020 election to try and overturn the result. So these are all possibilities as to what we might be hearing later today, but that remains to be seen.

What’s the end game here? Is the DOJ waiting for the hearing to end to file charges or will nothing come from this? What’s going to happen when this ends?

So at the end of this, there’ll be a report that is issued and that final report is expected sometime this fall. It was actually expected a little earlier, but everything kind of got delayed. So we’ll learn from them kind of what the conclusions are. However, it’s entirely up to the DOJ if they want to do anything with the information that’s put forward, they could choose to do nothing. The committee has talked to like Ginni Thomas, the wife of Clarence Thomas, the Supreme Court Justice. They talked to her at the end of last month. And they announced last month as well that they want to hear from Newt Gingrich about his contract with senior Trump advisors for television ads that would boost claims that the 2020 election included election fraud. So there’s a lot that the committee has been up to and that final report should include a lot of information and be rather illuminating, I imagine.

Millions of Social Security recipients will soon learn how big of a boost they’ll get in benefits next year. The increase is expected to be announced today and will be the highest in 40 years. It’s fueled by record high inflation and meant to help cover the higher cost of food, fuel and services. The 2023 benefits boost will be coupled with a 3% drop in Medicare Part B premiums, meaning retirees will see the full impact of the jump.

Thanks for listening to 5 Things. You can find us every morning right here, wherever you’re listening right now. Thanks to PJ Elliot for his great work on the show and I’m back tomorrow with more of 5 Things from USA TODAY. 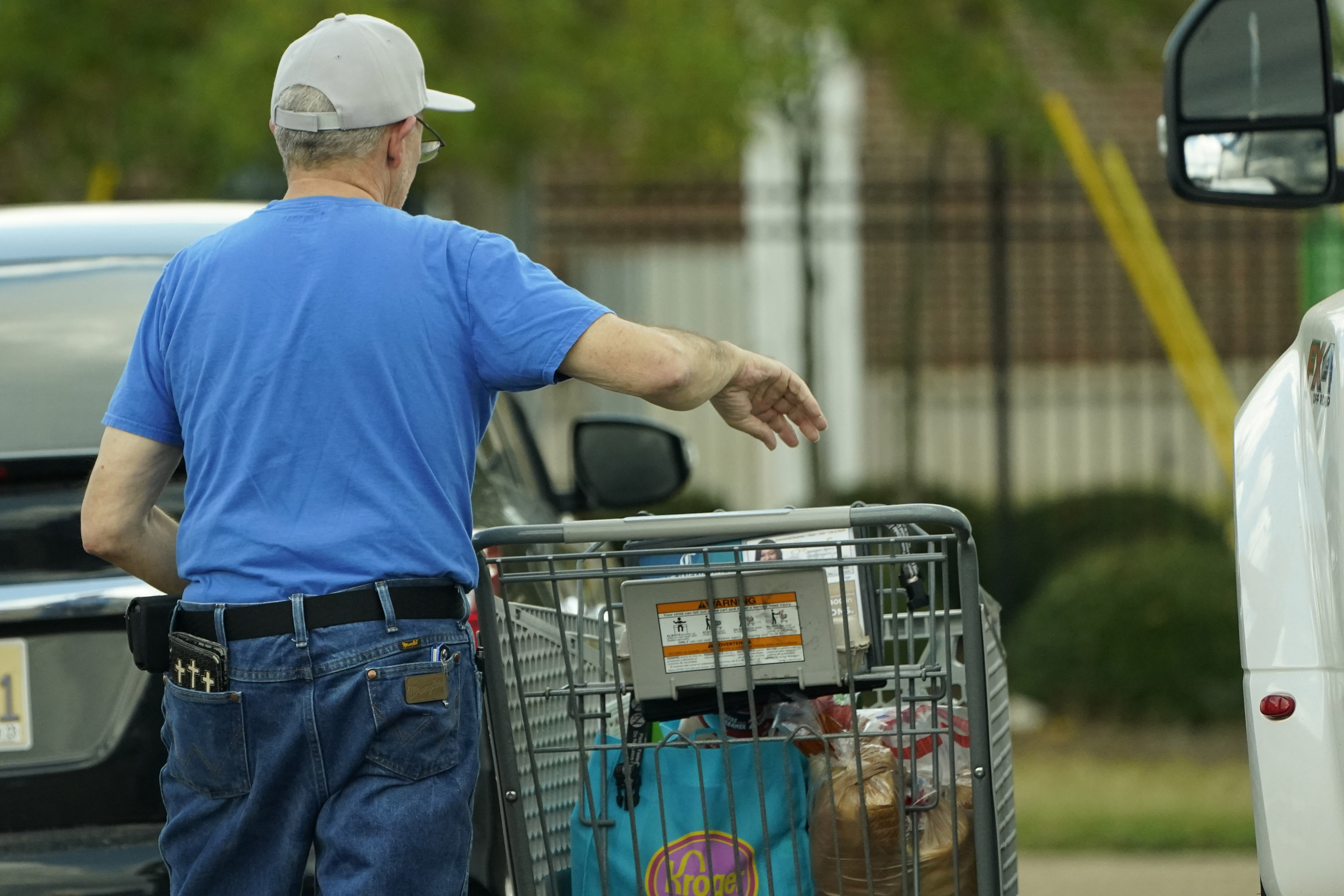 ‘Your whole life is gone’: Elderly retirees in Florida struggle to rebuild after Ian

Joe Kramer sings during the outdoor service at the Southwest Baptist Church in Fort Myers, Fla., on Sunday, Oct. 30, 2022. Octavio Jones for NPR […]

Netflix released the official trailer for “Blockbuster” on Friday, prompting Twitter users to point out the irony of the new series premiering on the streaming […]

Many Republicans have urged Donald Trump to wait until after the midterms to announce a 2024 presidential run. Not Matt Gaetz.

Many Republicans have urged Donald Trump to wait until after the midterms to announce a 2024 presidential run. Not Matt Gaetz.

President Joe Biden and First Lady Jill Biden enjoyed a brief stroll through downtown Nantucket, stepping in and out of stores on Black Friday. (Nov. […]